Blackboard LTI Payload Does Not Include lis_result_sourcedid

Problem:
When examining an LTI payload created by Blackboard with outcomes or scoring enabled. The POST LTI payload has an lis_outcome_service_url but no lis_result_sourcedid.

Solution:
This one is a silly one that has got me a time or two before. What I have found is that the user launching the LTI activity does not have a Student role in the class.
Posted by Michael Corrigan at 11:11 AM No comments:

We successfully moved to continuous integration earlier this year and are working on setting up our development with a continuous deployment. To run our tests on every pull request, we wanted a pipeline step that would ensure all our tests passed. The project is on .NET core v2.2.

At first, I tried the default configuration using microsoft/dotnet:sdk but ran into the following issue:

A compatible SDK version for global.json version: [2.2.101] from [/opt/atlassian/pipelines/agent/build/Project/global.json] was not found
Did you mean to run dotnet SDK commands? Please install dotnet SDK from:
https://go.microsoft.com/fwlink/?LinkID=798306&clcid=0x409


After researching this a bit, it finally dawned on us that there was an incompatibility between our global.json defined version and the SDK version available in the Docker image.

It turned out we needed to ensure that our global.json version had to match the SDK version available. In our case, we determined we no longer needed the global.json file and removed it.


For reference, here is what our pipeline configuration looked like:

I'm new to Defold but it's coming along. I am working on a hex tile game and I wanted to have different tiles represent sand, grass, and water. After updating my atlas file to include each tile graphic, I created a tile game object with logic to show or hide each sprite based on the passed in type.

Generating smaller maps I soon realized this was not going to work. Each tile game object had multiple sprites on it, and even though some were not visible, they still counted. And any sprite decorations inside the tiles, but only showing up ever on one tile also counted.

After playing around with the tint feature, I realized I could probably tint something white to be any color I wanted and anything dark or grey would still be visible (which is good because my tiles need outlines and I'm not going to build a shader for that...).

It worked really well. For each tile script I store the colors of each state, and tint the tile when I need it to change. 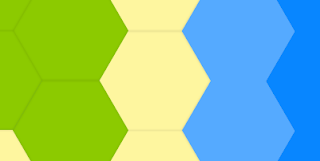 Also, move any tile decorators outside the tile, make the tiles as simple as possible and that will help optimize your game.
Posted by Michael Corrigan at 8:24 PM No comments:

While starting again on another python project and wanting to use Qt Creator to create a quick GUI, I was confused when things didn't go quite as planned. When creating a new Qt Widgets application, I got to a second step of Kit Selection but found a message reading:

Once I installed the Windows SDK (debug utilities specifically) and rebooted my computer, Qt Creator was able to find the default kit profile.
Posted by Michael Corrigan at 6:51 AM No comments:

Problem:
While trying to debug some new WebJobs that were running, I decided to implement the process of elimination to see what made certain job definitions not run. Here is the method, that would not run.

In the process of elimination, I simplified the function content to just print to the log when it ran. Also, I tried replacing the async Task portion the function with a void return. Neither changed anything. Then I tried changing the name of the function to TestJob and it ran. So I determined it had something to do with the name...

Solution
It turns out that any function naming ending in Async wouldn't not run. Once I removed this from the function name, the job triggered as expected.

I searched the web, but couldn't find a reason for this. If you know, please share in the comments.
Posted by Michael Corrigan at 11:40 AM No comments:

Problem:
Working on rebuilding my js files from Typescript src files, I went to run tsc and found this issue.


Solution:
Turns out this was due to not having typescript installed on WSL (where I was running the compiler command).

By first installing typescript, I was able to properly compile my code.

Initially, I had thought this might be related to using WSL in conjunction with Windows to develop. However, this was not the case. You can read my previous post to see issues related to WSL and Windows cross development.
Posted by Michael Corrigan at 11:33 AM No comments:

I really like Linux and MacOS over Windows. The commands and syntax feel more comfortable, the tooling more reliable (IMO), probably because I've managed Linux servers for some time. So, you can imagine how excited I was to see WSL or Windows Subsystem Linux.

Problem:
Switching between WSL Ubuntu terminal and Windows command line, I've found some various issues. More recently, however, I came across this one while trying to run a simple script:

To figure this out, I decided to let the operating systems each tell me what it saw in the .bin/ directory (I had run npm install on WSL prior):

On Windows (using attrib)
The target of the symbolic link C:\project_path\node_modules\.bin\eslint does not exist

If you want to develop node applications, then you either need to use npm on WSL or Windows, but not both. As my IDE is a Windows application and has built in script execution, I guess I will need to do all my npm management on Windows.

To fix this issue, the easiest/clean solution is to completely remove node_modules/ (verify it is removed on both Windows and WSL!) and then on your chosen operating system (Windows for me), run your npm install command.
Posted by Michael Corrigan at 8:34 AM No comments: